The science behind the stick

Premium performance masking tape requires a fine balance of three scientific forces; tack, cohesion and adhesion. You’ve probably read these words, but what do they actually mean? What is the science behind the stick?

Firstly, it’s important to understand that the adhesive, or ‘glue’, that gives the stickiness comes in many different forms. There are adhesives designed to stick quickly but temporarily, some others designed to stick for the longer term or permanently, some most suitable for smooth surfaces, some others for rough ones. The properties of each of these adhesives, are the result of different tack, cohesion and adhesion combinations. 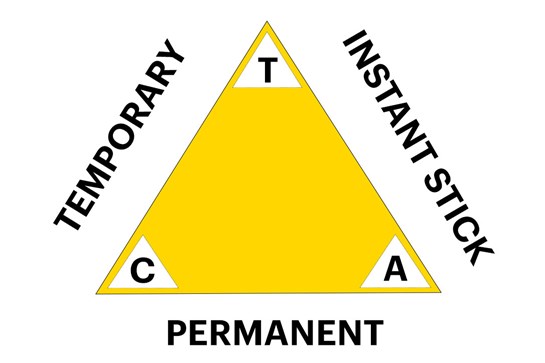 In other words, when working with a pressure-sensitive adhesive product such as masking tape, all three forces are at work in delivering the performance you need.

Let’s look at each one of these forces in more detail:

Imagine the situation in which you need a tape that should stick to a solid surface instantly, with no finger pressure. That instantaneous bond is known as tack. The tack, easily recognisable when the adhesive seems “sticky and soft” to the touch, is mainly required when immediate grab is needed, and it is advisable especially on rough and semi rough material where the surface contact is less. An high tack tape will stick fast for temporary applications, whilst a lower tack is usually combined with high bonding for long – permanent applications.

With high tack, you will be able to stick and unstick your tape many times without aggressiveness - but always remember to clean properly the surfaces.

Adhesion – keeping your tape where you need it

Tack alone will give you that instant bond, but won’t keep your tape where you need it for long. If you want a longer and tougher bonding, you need adhesion.

With a strong bond, it will require more pressure to remove the tape, which makes high adhesion tapes unsuitable for delicate surface applications.

Cohesion – giving you the right amount of hold

Cohesion is the force that makes tape especially strong, tough and stable once adhered to the surface – something which comes in handy on larger jobs where you have spent a while preparing a large area especially when you need to combine the tape with drop sheets or masking paper. The cohesion will fight against the weight and the gravity force, keeping everything in place.

Importantly,  a higher cohesion tape will also stay put longer in higher temperatures, which can make the molecular bond weaker. The downside of all this strength is residual mess after removal, which means weighing up the risks and benefits for each project.

With three forces at play across our range of tapes, our designers carefully consider, and experiment with, a variety of adhesives to deliver performance which is tailored to the intended application.

Compare our multi-purpose tape to our delicate surface tape: it’s easy to see how the levels of tack, adhesion and cohesion have been altered to deliver different performances, wisely designed for specific jobs.

So, next time you read technical description of a pressure-sensitive adhesive tape, you will be no longer unprepared: now you know the science behind the stick, and you can choose the right tape for you like an expert.

Sharp and precise edges for a professional job.

One tape for countless surfaces.

Get the edge, go pink.

Let's get in touch.

Keeping excellent masking products in your shop means selling efficiency and high productivity to your customers. Join the Q1® family to watch your business grow.